Why I implanted an RFID chip in my hand 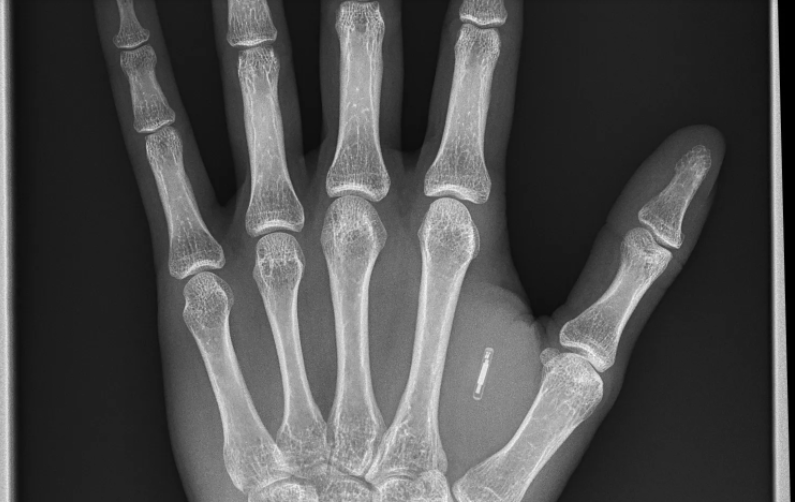 Jan, our Community Manager at Mews, has been chasing me to write this blog post for some time now. Since we are far past the one-year anniversary of it sitting on my Asana board, and we recently released a feature related to it at Mews, I think now is the perfect time to write this post. So, let’s talk about it… I injected myself with an RFID.

Back in 2016, I moved into an apartment I had just purchased, and carrying keys became a normal part of life. On two occasions, within the same month, I lost my keys, and after the late-night call-out fees from an emergency locksmith, I figured there must be a better way to avoid the annoyance of all the above.

After some quick research, my first thought was a pin code door solution; however, the experience of entering a pin code, especially after a night out, was not the best solution. In the end, I landed on a Samsung door lock that supports both a pin code and an RFID tag because if I do happen to lose the tag, then I have a level of redundancy.

After a week, I started doing some more research into an access method that would let me in quickly but would not require me to carry an additional item. You might be thinking that a card in a wallet would do the trick, but compared to other countries, the infrastructure for NFC payments in Australia was already widespread. It was normal that Apple & Google wallet had already replaced your physical wallet and a government app had replaced your driver’s license, and I haven’t carried a wallet since.

I stumbled on a Biohacking talk from Amal Graafstra who runs Dangerous Things, which sells RFID implant kits, and I was immediately convinced to give it a try. While I strongly recommend that a medical professional implants this for you, with the help of a friend and a quick click of the syringe, I had an RFID tag implanted in my hand.

After pairing with my Samsung door lock, I could finally be keyless. With the tap of my hand on my door, I’m home. I’ve had the implant since April 2016, and have been using it to unlock all the different places I have lived in.

What does this have to do with Mews?

One of our clients, CityHub, implemented a concept that when you check in to a property you grab an RFID wristband which functions as your customer identity. It can be used to open your pod’s door, or more importantly, it can be used to access their self-service bar. Each time you dispense a beer, your charges are sent directly to Mews and processed through Mews Payments.

When I visited CityHub, the RFID in my hand was added to their database. Now, whenever I stay at a CityHub property, I can skip the wristband entirely. Recently at Mews, our Connectivity team has exposed Resource Access Tokens via our API. When a key is created through an integration partner such as Salto or Assa Abloy’s VisiOnline, they return the serial number of the RFID key back into Mews. Other integration partners such as a POS vendor or a self-service bar integrator can now read the serial number and look up the customer it’s bound to in Mews for charging.

You can read more about these API’s here.

Is this the future?

If you base future predictions off Matt Groening’s Futurama, in the year 3000 having a chip in your hand will be normal.

In reality, this will probably never happen since most of you reading this will stick with your traditional keys – but if you’ve had the same problem as me, you’re one chip away from opening your house with the tap of your hand!

If there's something Adam doesn't know about hospitality tech, it's probably not worth knowing. A Mewser since 2017, he now works as a Product Manager down in Sydney.

The 7 most important KPIs for hotel industry
10 best ways of greeting guests in the perfect hotel welcome
Top 10 benefits and advantages of a hotel management system
Hotel chargebacks: how they work and how to dispute them
How does an online hotel reservation system work?

Pride 2022: snapshots from Mews’ Pride Community
Are you ready for the glamping boom?
How to build and manage your hotel housekeeping team
Five steps to optimize your hotel room cleaning service
Workflow automation: the best uses of Zapier in hotels